More poems from the Newmarket Creativity Center inspired by my painting "Ocean Moon". The first poem "INDIGLORIOUS" is written by George Jack and "My Heart Is An Ocean Moon" by Ross Bachelder musician, artist and poet.

Dew, like softly jeweled fugitives
Cling to leaf, stem, petal, in it’s wake, and
Presses the shoulders of my robe

As might ghostly fingertips
Belonging to the opened palms of well wishes
Reassuring me at some reverse-funeral procession
I would only be welcome at, and
Privy to
At this sherbet-spectral hour of the day.

All that’s missing
Are all of the colors
In dreams and in the world and
Everything else I’ve left behind
To be here at this moment,
To bathe in this both rare and
Precious blue, illuminating this,
The other side of twilightenment.
~George Jack 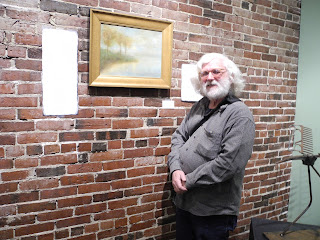 My Heart is an Ocean Moon
Response to “Ocean Moon,” a landscape by Susan B. Luca

You know, I’m just another guy,
I think you’ll all agree.
But there are times when I see stuff
That other guys don’t see.

For instance, when I watch TV
Or shop around for food,
I learn just how to be a man
And cop a manly mood!

On every channel except C-SPAN,
And down those grocery aisles,
They tell me how to be a stud --
Man Stuff in piles and piles!

But really -- can we always trust
What Advertisers say,
‘bout what it takes to be a man,
And live the manly way?

On Tuesdays they don’t like my hair --
They think it’s too damn gray!
But when those Fridays roll around,
Gray makes a HUNK, they say.

I really want to learn the truth --
It couldn’t come too soon!
But what the hell does THIS dude know?
My heart is an Ocean Moon!

If you REALLY want confusion, friends,
Check out the deodorant aisle!
Make a pit-stop in the smells
And linger for awhile.

Such an awful stink they make
About which brand to choose.
Adrenaline will make you tough -
Your testosterone will OOZE!

Or give the Power Beads a try --
Temptation might do wonders!
But which, you ask, is sure to bring
Excitement to my unders?

And what about them razor blades?
Now THERE’S a manly  item!
Mach 3, Flex 4 or Turbo Charge --
But WHICH one will EXCITE ‘em?

Hey, let’s go down the Shampoo Aisle --
And get an Ocean Charge --
Want Heat Igniting Citrus, Boys?
Them babes are loomin’ Large!

I want to know just what to buy,
What makes the women swoon --
But Jesus -- what does this guy know?
My heart is an Ocean Moon!

My LOVE LIFE sure could use a fix --
I’ll get me some Viagra!
A pill or two should do the trick --
I’ll become the Great Niagara!

I suppose it would be swell as hell,
To be up for four straight hours,
It’s an inconvenience I can’t afford --
I’d have to take a shower!

Now I hate to be redundant here --
I’m sounding like a goon!
And besides -- what do I really know --
My heart is an Ocean Moon!

I don’t shoot guns, I don’t race cars,
Don’t drink and chase the ladies.
I’ll bet those guys on Madison Ave
Think I belong in Hades.

I like to READ and WRITE, you see,
And visit ART MUSEUMS.
Kandinsky, Klee and Nevelson --
You really oughta see ‘em!

And sometimes, on a warm spring night,
I drive down to the Ocean
And stand beneath a cool blue moon --
I GET these funny notions.

The tender part of me is tough --
Though the Manly Man’s inside.
It insists on equal billing, by God --
The POET is my guide!

So hit me with your Hard Sell, boys --
And I’ll take it like a man.
Just hang on to the stupid stuff --
Or dump it in the can.

You know, those Empty Suits must think
I’m crazy as a loon!
And they may be right, for all I know --
‘Cause My heart is an Ocean Moon!

Comments email: SBLuca@Gmail.com
Posted by Susan Luca at 10:33 AM

The lovely gallery, Eventide, run by Teri Canelle Eramo is sponsoring a new summer show "Open Spaces". The opening is Saturday July 14, 2012 from 5pm to 8pm. The gallery is conveniently located on Route 133 a few  places down the hill from The Village Restaurant. I'm planning to visit the opening and hope to see you there.

A few of my new paintings will be showing at Eventide Studio & Gallery this summer.

Visit Eventide Studio & Gallery in magical Essex, MA to view my paintings and to meet Teri.


Comments email: SBLuca@Gmail.com
Posted by Susan Luca at 10:29 AM 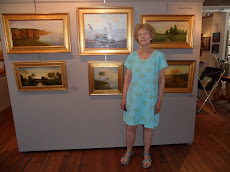 Welcome to my blog and I hope you enjoy viewing my paintings and reading my posts.
The arts, both doing and viewing have been a great part of my life and I hope you also are inspired to include art in your life. My husband and I enjoy traveling and always visit as many art museums as possible as well as attending local shows of interest. Some where along the visits to museums I became a great fan of Corot landscape paintings and this grew to a love of the Barbizon artists. Perhaps this is why I'm happiest doing a landscape painting. A lot of my inspirations come from studying Tonalism, The Hudson River School and The White Mountain Painters.
Please enjoy viewing my paintings and reading about my art adventures.
EMAIL: sbluca@gmail.com